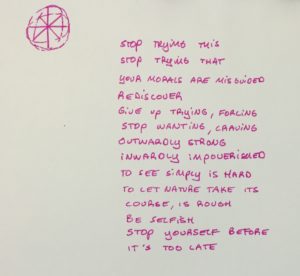 A couple of years ago I decided to run a series of self-experiments. Each day, I would brew a nice fresh cup of coffee for myself. At that time, I think it was exclusively espresso. The espresso was hot, no cream or milk, but a nice piece of butter was included to sweeten the deal. The butter is a source of fat to help stabilize the eventual rise and fall in my blood sugar.

The experiment- was simple, at first.

I decided to pour this fresh cup of espresso and let it rest in front of me. Simmering, I could see the heat come from the cup. Yum. The experiment was to simply sit and stare at the espresso with a journal and pen in hand. Those of you who know me on a more personal level usually never see me without a pen and paper close by. I sat and stared. I wanted this espresso so badly because at that time I was a regular consumer of espresso. Let’s say I had been drinking espresso each morning religiously for 18 months or more.

The pressure, as you could imagine, stirring within me to drink the espresso was tremendous. It felt like a mighty force of nature. It took all of my willpower to stop myself from drinking the cup. I set a timer for 10 minutes. Here I was with this yummy fresh cup of espresso with all the fixing in front of me and the name of the game was to not drink it. Am I crazy? What was I thinking? What type of experiment was I running here? What was the game I was attempting to play?

Interesting fun fact for the day for those of you who do not know me personally. For the better part of the past 6 to 7 years I start my day by writing a poem. First, I sit quietly for a couple of minutes then I read an inspiring work of art. Today it happened to be from the Tao Te Ching by Lao Tzu that inspired me to write this post. Attached you see the poem I wrote in response to contemplating the message.

Back to the torture of that experiment. At first, I resolved myself to not drinking the espresso. I wanted to see the different ways I would persuade myself to drink the espresso. What were the voices or stories I was telling myself? I thought if I were to learn about the games I was playing internally then I could have greater control over my life’s direction. I saw this experiment as an act of active listening. I listened to and wrote down the different story lines I sold myself.

I should drink this coffee because I will be tired later. Was I tired then? No. A story line that would continue to reappear was the need to prepare for later. What if I am working with a client or on a project and I get tired? What then, I would ask myself. The active listening exercise was not to defend or to offer a counter example. Therefore, I would not respond to these internal marketing messages I was sending myself. Since the point was too active listen, it was important that I was determined to not drink the espresso. Equally as important in my eyes was the timer.

Yes, if you are wondering, I would eventually not drink the espresso. As for later, when I was or if I was tired, I did a couple of squats to get the blood flowing and I felt energized. The moral of the story is that everything that appears within you is not always accurate. When you listen to or become mindful of your decisions, then you give yourself a chance to generate alternative options, and for me, that was squats in response to being tired. Yes, if you are wondering, I am back on the coffee train, back then I think I stopped for 6-9 months. Again, the point of the experiment was simply to create a scenario where I had to listen to myself.