How long is your scar?

Scar is defined as a noun. A noun is used to identify any of a class of people, places, or things common- as defined by Google. Google defines a scar as; a mark left on the skin or within the body tissue where a wound, burn, or sore has not healed completely and fibrous connective tissue has developed. And a scar is defined as a verb, mark with a scar or scars. A verb is defined as, a noun, a word used to describe an action, state or occurrence, and forming the main part of the predicate of a sentence, such as hear, become, happen. Oddly enough, a verb can also be defined as a verb, per Google, use (a word that is not conventionally used as a verb, typically a noun) as a verb. To sum up how I am going to use the word scar please read the next sentence. A scar, as defined by Dominic, is a mark left within the body or mind that connects to a certain time period, action, or context. 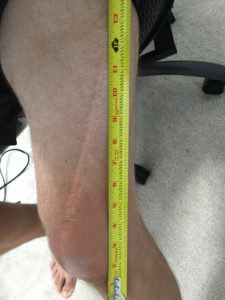 In 2001 I was shot in my left leg by a modified SKS Assault rifle that had a 7.62 mm caliber bullet. It went in 5.5 inches above my left knee on the medial side into one of the quad muscles called the vastus medialis. The bullet just missed my knee and ended up sticking into and resting 5.5 inches below my knee and 3 inches below my fibular head and stopping in and around the fibularis longus.   Therefore, the bullet damaged my fibular nerve, causing a 1.5-inch gap, and that created a gait abnormality. The symptom of the gap was foot drop and that is when the dropping of my left foot became structurally impossible to lift up. Since the nerve was detached by 1.5-inches, the gap was so great, that the signal from my brain was disconnected from sending a signal to pick up my foot via the fibular nerve. This break off of the nerve around the fibular head and effecting the fibularis longus made impossible for my brain to sense via my nervous system. In fact, still to this day, I have numbness starting at my left anterior superior iliac spine down through all of my left leg. 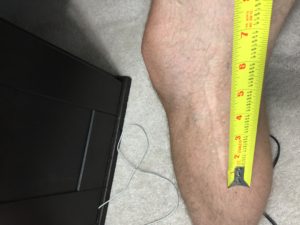 The split between my fibularis nerve was so great that I had a couple of options presented to me by the medial staff at University of Maryland Shock Trauma Center. I could have a nerve graft, which is a surgical technique in which they would take a segment the nerve at the arch of my right foot and that would act as a track to connect my brain to the use of my left foot. Or, I could live with the foot drop. The Shock Trauma Team explained that a nerve could grow by 1 mm and that over time it might be possible for the nerve to regenerate itself. The likely hood that my nerve would regenerate at a pace of 1 mm to 1.5-inches or 38.1 mm was not high. The odds were that I was going to be dealing with foot drop for the rest of my life. Therefore, I would be wearing an AFO (Ankle Foot Orthosis) for the rest of my life. If you have not seen one, I encourage you to check it out and get a visual. 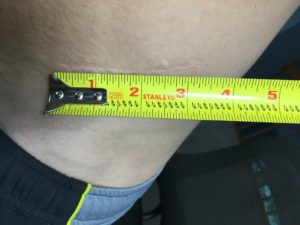 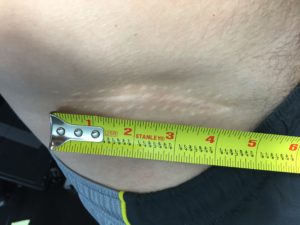 I wore an AFO brace for over 12 months because I was unable to pick my foot up past 90 degrees. For over 12 months I was structurally disrupted from having a normal gait. This was unexpected in terms of not planning my childhood around being unable to walk normally for over 12 months. I will not go into going from 196 lbs. to 116 lbs., or the amount of oxycontin (a close relative to morphine, heroine, and fentanyl) I needed to take for the pain, or what I had to do to keep my brain from being addicted to narcotics. However, I should convey the tools, teachers, and tactics available in 2001 for rehabilitation and conditioning.
Rehabilitation is the act of restoring something to its original state, like the rehabilitation of the forest that had once been cleared for use as an amusement park (per www.vocabulary.com). The noun rehabilitation comes from the Latin prefix re-, meaning “again” and habitare, meaning “make fit” (per www.vocabulary.com). I went to Kennedy Krieger Physical Therapy everyday for 1 year. My physical therapists, who were mostly physical therapy aides in 2001, told me to get a desk job because I would be unlikely to move efficiently or effectively again. I share this portion of the counsel I received from the rehabilitation professional only to highlight the professional expectations based on my case history at the time.

So here it is, 2016, and 2017 is fast approaching as summer begins to come to an end. When you convert the 15 years since my injury into minutes, then I have lived with these scars for 7,884,000 minutes. In my opinion I chose to convert years into minutes to order the amount of time differently. I picked minutes because it brings into actual existence the amount of minutes I had to be aware of my movements, aware of my surroundings, and overall thoughtful of how I utilized my effort. That amount of concentrated effort would teach anyone about what it takes to move effectively and efficiently. However, that type of investment would only teach me how to help myself and not to help others. The attentiveness to detail from within my own body has developed over time only through trial and error. If I have no way of testing my effort, no standard for evaluating the use of my body, then my effort would be random, and so would my results. Without the use of reflection in terms of feedback the consequence of my effort would be less reliable. I could not accurately impose a demand with the same meaning if I would not know the probability of the outcome.

Interestingly enough I have been a personal trainer for 13 years, and I have worked at personal training as my craft for 11 years. I use the term craft here to denote indicate that around the year I started to exercise the skill of training others. The skill of training others is different then training myself because the trial and error process has more moving parts to consider. First, and foremost, the person, client, or student must be motivated to exercise. For a long time I was prompted to exercise just in order to survive my surroundings. Could I get up and off of the toilet without holding on? Yes or no. It was simple and straightforward. A person needs to have some interest or enthusiasm to exercise or they will not be determined to continue when it gets hard. And anybody that has exercised is aware that exercise inevitably gets hard in terms of requiring more effort over the course of an exercise session. Therefore, keeping a client determined to exercise and making it easier for them to focus on the task at hand is one of my favorite parts of the process.

I imagine myself as a movement educator whose purpose is to draw out the potential from within the client. The standards a client has for himself or herself are vital for me to learn and to utilize. When I signed up for the Marines, which would have been my professional destination before I was shot, and my chosen occupation when I signed up was combat engineering. I enjoy constructing a structure that helps a person to reach their end goal. Hence, it is important for me to know the standards by which a client is measuring their success and I must know the current level of their ability to reach their target task.

Over the course of the past 20 years of learning how to compare my physical injuries to my intended target task I have learned a couple of lessons. The principle lesson I have retained is the importance of the mind-body connection. The relationship of your mindset to your actions is relevant and imperative to use to your advantage. The odds of enjoying everyday your exercise is not realistic to consider. You will face tough opposition. Frequently you must endure the difficulty and hardship of not reaching your goal within your expected time frame. It is hard to accurately estimate how long it will take you to change your body, lose the fat, and get into shape for your tough mudder.

The bottom line: Day-to-day you have an opportunity to exercise your choice. You can choose to exercise and to make healthy behaviors a first concern in your life. You might not do all the right actions. Put your effort in perspective and take the broad view on your behaviors. Is your mindset angled to take the right actions most often? What are those standards or benchmarks you use to evaluate your effort? In an flawless world, you could have it all. You could be determined to create change and succeed in the time frame you want. The determined spirit you start journey with will not at any point become obstructed. The opportunity to build your character is present every day within each decision you make. I wish you well in your experiment and hope your procedure leads you to elevate the level of health.

The take away from this is: Although you may plan to exercise everyday most days you won’t want to. It is difficult to dig down and find the motivation/strength to want to but in the end it is worth it.